Is Now the Time to Consider Actively-Managed Funds? 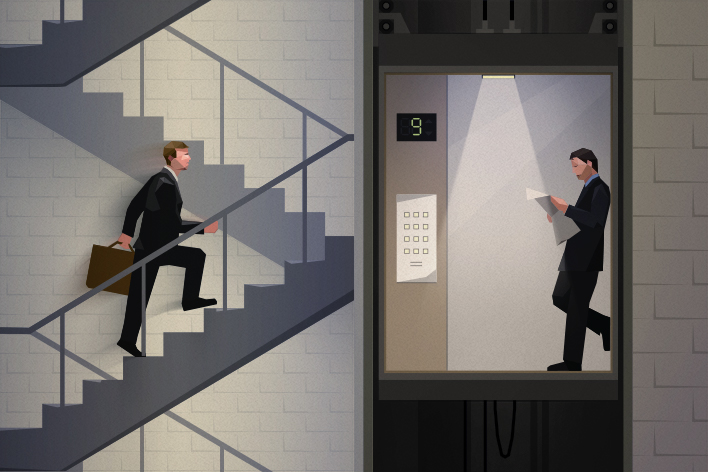 No question, index funds have enjoyed strong performance the past seven years during the second longest bull market run in U.S. history. But if the market should stumble under the weight of the recent tepid economic conditions and the prospect of rising interest rates, a new Thrivent Mutual Funds Active vs. Passive Study, suggests that investors in index funds may be well served to consider switching their dollars to actively-managed funds.

The study shows that during the two market crashes of the 21st Century, the S&P 500 significantly trailed actively-managed large cap no-load funds.  In fact, as the following graphs demonstrate, the index wouldn’t even have ranked in the top 50% in terms of performance during a single 12-month stretch of the Dot-Com Crash of 2000 – 2003, and would have trailed its peer group during 93.1% of the Global Financial Crisis of 2007 – 2009: 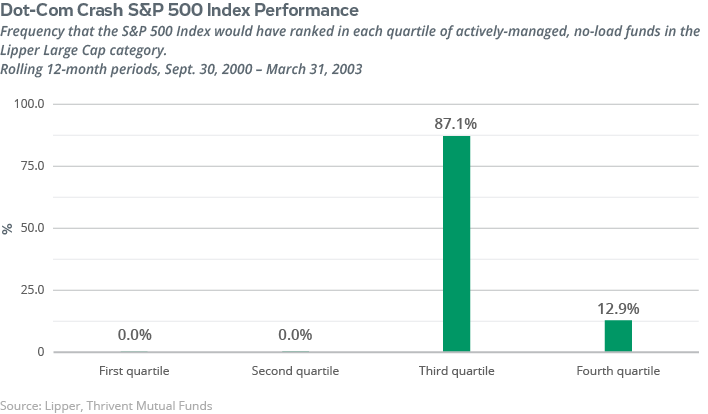 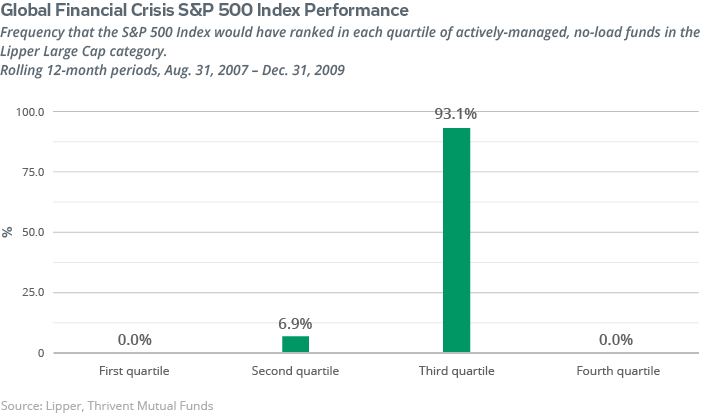 In fact, as the next graph shows, the index trailed the universe of actively-managed large cap no-load  funds the majority of the time over the entire course of the volatile decade of 2000 through 2009. 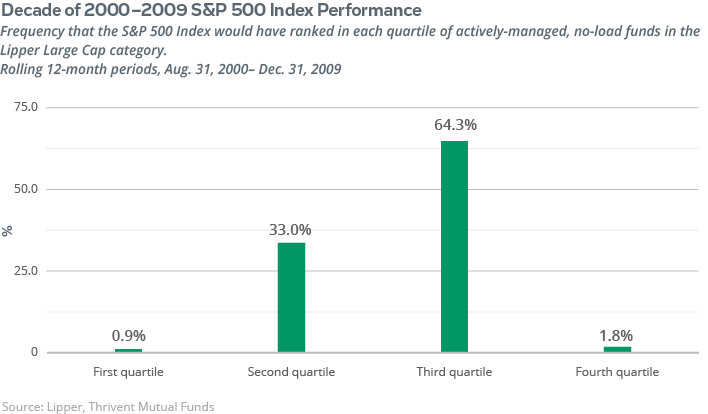 The S&P 500 is not the only index to experience sub-par performance relative to actively-managed funds during bear markets and extended periods. The study also focused on the Russell 2000 Index of small stocks.

While the Russell 2000 has done well versus the actively-managed fund universe during most of the recent bull market, it would have ranked in the bottom (4th) quartile of the small cap category during 90.3% of the 31 rolling 12-month periods of the Dot-Com Crash. In fact, the index would have ranked in the bottom half of corresponding actively-managed, no-load funds the majority of the time over the past 25 years, dating back to 1992, as the following chart shows.

If you’re concerned that the long bull market run is winding down or that the recent rise in interest rates will continue, or if you’re apprehensive about the uncertainty of a new administration, this may be the time to consider switching from index funds to actively-managed funds. While past performance is no guarantee of future results, as the Thrivent Mutual Funds Active vs. Passive Study demonstrated, the no-load actively-managed funds in the study have done a better job of limiting losses than their corresponding indexes during the recent bear markets and volatile market stretches.

Here are several other reasons to consider switching to actively-managed funds:

In terms of pure long-term performance, index funds may (or may not) have a slight edge. But when the chips are down and the markets are reeling, the Thrivent Mutual Funds study suggests that you may be better served to have an active manager in your corner making the crucial decisions.

The tables below summarize some of the key results of the study during the Dot-Com Crash, the Global Financial Crisis and the decade of 2000 – 2010.

The table headings include: Lipper funds category (“large cap core” or “small cap core”), Index (S&P 500 or Russell 2000), the four performance quartiles (the higher the percentage the worse the relative performance), and the Average Percentile Ranking.

The Average Percentile Ranking is not tied to the quartile rankings, and provides a different vantage point on the comparative performance. It measures the average percentile of how they ranked over the given period of time. As with the quartile rankings, a lower percentage indicates better performance while a higher percentage indicates worse performance. For example, in the Dot-Com Crash table below, the average percentage of the S&P 500 was 70.6%, which put it in the bottom 30% among all funds in that category.  The Russell 2000 Index fared even worse with an 81.9% average percentage – which means it would have ranked in the bottom 18.1% of funds in the small cap category.

In the following charts, please keep in mind that the 1st quartile represents the best performance and the 4th quartile represents the worst. For example, in the first table entitled “Dot-Com Crash,” you will see “0.0%” in the 1st and 2nd quartiles for each of the two indexes. That indicates that neither the S&P 500 nor the Russell 2000 would have ranked in the top half (1st or 2nd quartiles) in performance in their respective actively-managed no-load fund groups during a single 12-month period from Sept. 31, 2000 through March 31, 2003.

To read the complete report, with full research and ranking methodology and expanded findings, go to Thrivent Mutual Funds Active vs. Passive Study.

Thrivent Mutual Funds offers a family of more than 20 mutual funds actively-managed by our more than 100 investment professionals. Investors can choose to build their own diversified portfolio with a combination of Thrivent Equity Funds and Thrivent Fixed Income Funds, or let us do it for them with one of our diversified Thrivent Asset Allocation Funds or Thrivent Income Plus Funds.

All information and representations herein are as of 12/01/2016, unless otherwise noted. 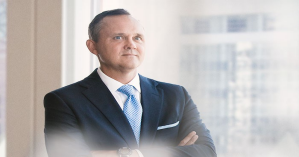 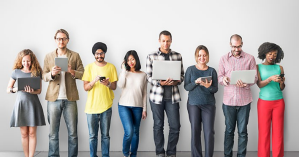 Investing Essentials
A Universe of Mutual Funds for Every Objective