Personal Performance allows shareholders to see their personal return by portfolio, account number, or by individual fund, giving them a better indication of how their investments performed.

After selecting the Personal Performance link, the following information will be shown: 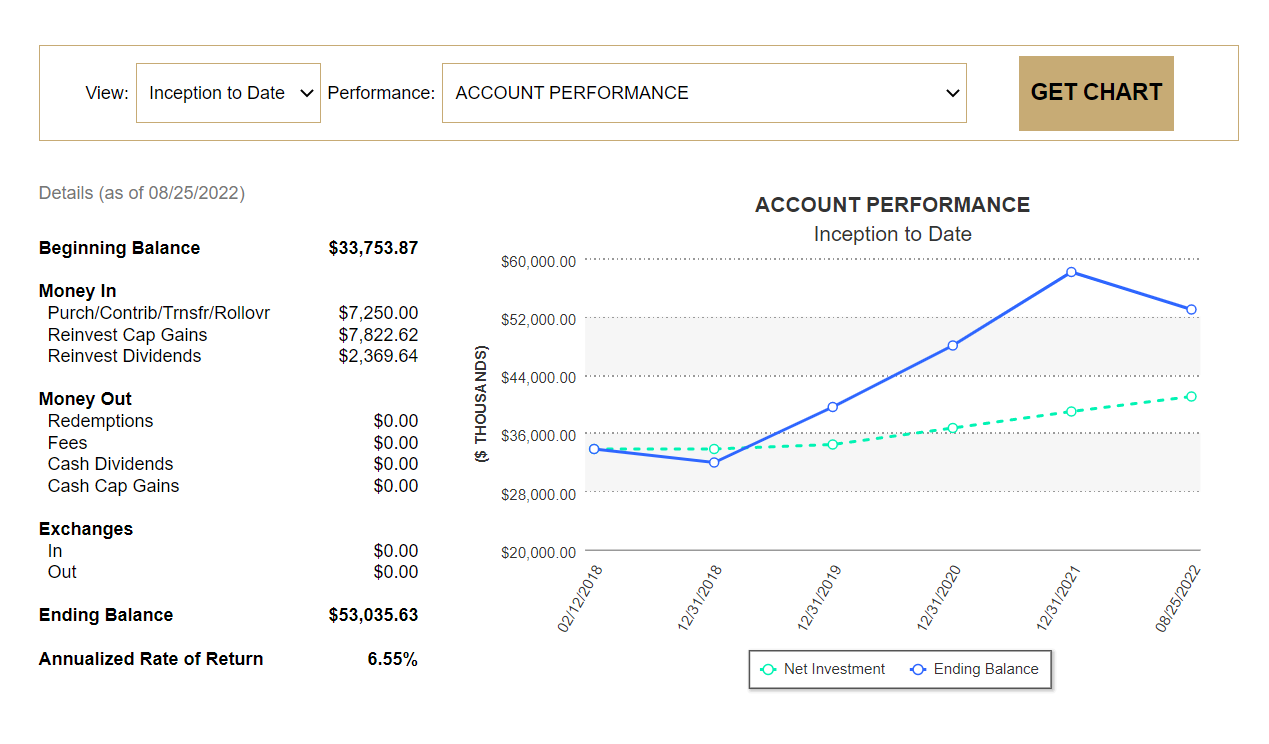 Beginning Balance: Account balance at the beginning of the time period being viewed.

Purch/Contrib/Trnsfr/Rollovr: Amount invested into the account acquired via purchase, contribution, transfer or rollover.

Reinvest Cap Gains: Capital Gain distributions made by the fund which were reinvested into the account at the time they were paid.

Reinvest Dividends: Dividend distributions made by the fund, which were reinvested in the account at the time they were paid.

Redemptions: Amount taken out of the account due to selling your mutual fund shares.

Fees: The amount of account-related fees paid by selling shares in your account during the time period being viewed. This could include fees like: overnight mail delivery charges, wire fees, low balance fees, and/or an annual custodial IRA fees. This total does not include the fund’s operating expenses, 12b-1 fees or sales loads (as applicable) as those are including in the fund’s price calculation and not separately withdrawn from your account.

Cash Dividends: Dividend distributions paid out to the shareholder directly at the time they were paid.

Cash Cap Gain: Capital Gain distributions from the fund paid out to the shareholder directly at the time they were paid.

Exchanges: A transaction made between two different funds in the Thrivent Mutual Funds. "Exchange In" is the purchase of shares into the new fund and "Exchange out" is the redemption of shares of the existing fund.

Ending Balance: The account balance at the end of the time period being viewed.

Net Investment: The money invested by the shareholder, reduced by any withdrawals over the selected period of time. Fund dividends and capital gain distributions are not included in this value.

Annualized Rate of Return: A rate of return is the gain or loss on an investment over a specified time period, expressed as a percentage of the total investment. The annual return shown is calculated using the Modified-Dietz method and is the return an investment provides over a period of time, expressed as a time-weighted annual percentage. The annualized rate of return is calculated as the average annual return an investor receives over a given period of time.

How is my Personal Performance calculated?

There are many ways to calculate Personal Performance. Thrivent Mutual Funds uses the Modified-Dietz method. This method is based on a time-weighted analysis that takes into account the returns of the funds you own, as well as the timing and amounts of your share purchases and redemptions. The return calculation includes dividends and capital gain distributions and account fees.

Am I able to select the calculation method that I would like to use for my account?

Unfortunately we are unable to accommodate any other calculation method outside of Modified-Dietz.

What timeframes are available for calculating my Personal Performance?

Performance data is available in three (3) timeframes: year-to-date, prior year and inception to date.  If your account was opened in 2004 or earlier, "inception to date" only goes back to 7/16/2004.

How are fees accounted for in the performance calculation?

The Personal Performance calculation includes all fees, which reduces the performance by the effect of any and all fees. This includes any fees related to the investment expenses of the fund as well as any fee related to the purchase or maintenance of your account(s).

Your Personal Performance is a calculation of the return for your account using the Modified-Dietz method. We take into account the timing and amount of the transactions and activity in your specific account(s). The fund's performance assumes the investment occurred only at the beginning of the time period.

My investments are not performing as I had expected.  What is causing this and what should I do?

A wide variety of factors can affect the performance of your account, including the allocation, holdings, personal trades, and overall market volatility. If you have questions regarding your account activity you can contact us at 800-847-4836 Monday through Friday, 8 a.m. to 6 p.m. central time. When calling, say "mutual funds" for faster service. We also suggest you talk with a financial professional if you need assistance deciding what to do with your investments.

Please note that there are other methods to calculate the personal rate of return on investments which could provide different results than the Modified Dietz method. The data used for the calculation(s) is obtained from historical transaction data from the shareholder recordkeeping system. Keep in mind that your quarterly statements are the official record of your account(s).

Please note that the Modified Dietz method may produce anomalies in your personal rate of return in the form of large positive or negative returns. This may happen when an account or portfolio experiences large cash flows in the form of purchases or redemptions or during periods of extreme market fluctuation.

You can view your personal rate of return by portfolio, account number or by individual fund within that account. The calculation includes the accounts that were open and active at one time, but are now closed.