Despite some growing economic concerns, the U.S. stock market continued to rebound in February, extending its strong start to 2019 after suffering a steep drop in the 4th quarter of 2018.

The international markets also continued their positive start to 2019. The MSCI EAFE Index, which tracks the performance of developed-economy stocks in Europe, Asia and Australia, rose 2.33% in February after a 6.47% increase in January.

Here are some other recent economic highlights, which are covered in greater detail later in this report: 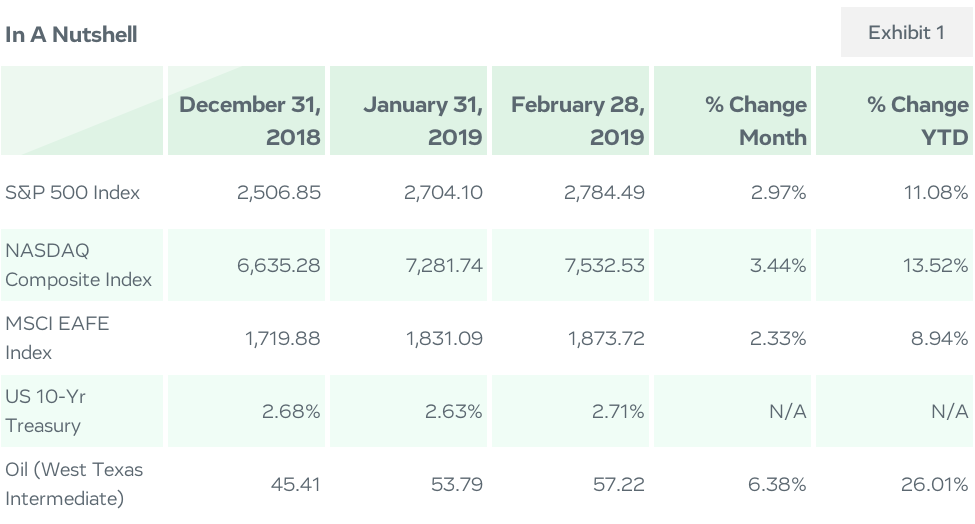 What’s ahead for the economy and the markets? See: March Market Outlook: Fed Pivot Should Aid Economy by Mark Simenstad, Chief Investment Strategist

The NASDAQ Index gained 3.44% in February, from 7281.74 at the January close to 7532.53 at the end of February. It is up 13.52% for the year. (The NASDAQ – National Association of Securities Dealers Automated Quotations – is an electronic stock exchange with more than 3,300 company listings.)

Total retail sales for 2018 were up 5.0% from 2017, according to the advance monthly retail sales report issued February 14 by the U.S. Department of Commerce. The report also noted that sales in December 2018 were up 1.2% from the previous month. But January 2019 retail results have not yet been released because of a delay in data collection and processing during the government shutdown from December 22, 2018 through January 25, 2019.

For all of 2018, clothing and clothing accessories stores were up 4.8%, food services and drinking places were up 3.4%, auto sales were up 3.0%, and sales by non-store retailers (primarily online) were up 9.6%.

U.S. employers added 304,000 new jobs in January, according to the U.S. Bureau of Labor Statistics Employment Situation Report issued February 1. However, the unemployment rate edged up 0.3% from 3.7% to 4.0% over the past two months as more people entered the work force – an indication that the strong job market is attracting more workers.

GDP grew at an annualized rate of 2.6% in the 4th quarter of 2018, following growth of 3.4% in the 3rd quarter, according to the "initial" estimate issued February 28 by the BEA. The economy was bolstered by “positive contributions from personal consumption expenditures, nonresidential fixed investment, exports, private inventory investment, and federal government spending,” according to the BEA. The report also noted that there was a weakness in residential fixed investment, and state and local government spending.

According to the BEA, the decrease “reflected decreases in personal dividend income, farm proprietors’ income, and personal interest income that were partially offset by increases in social security benefit payments and other government social benefits.”

All Sectors Up Again

Oil continued to rebound in February, extending its rally from January after experiencing a decline of nearly 40% in the 4th quarter of 2018. The price of a barrel of West Texas Intermediate, a grade of crude oil used as a benchmark in oil pricing, climbed 6.38% for the month, from $53.79 at the end of January to $57.22 at the February close. The price of oil has surged by 26.01% in the first two months of 2019 after closing 2018 at $45.41 per barrel.

The MSCI EAFE Index moved up for the second consecutive month in February, rising 2.33% from its January close.

What’s ahead for the economy and the markets? See: Fed Pivot Could Aid Economy by Mark Simenstad, Chief Investment Strategist

All information and representations herein are as of 03/01/2019, unless otherwise noted. 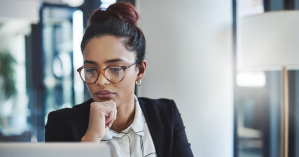 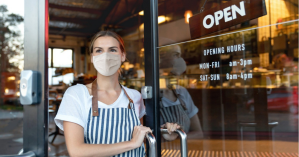 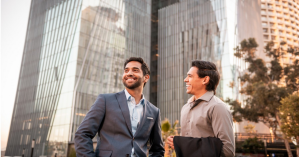